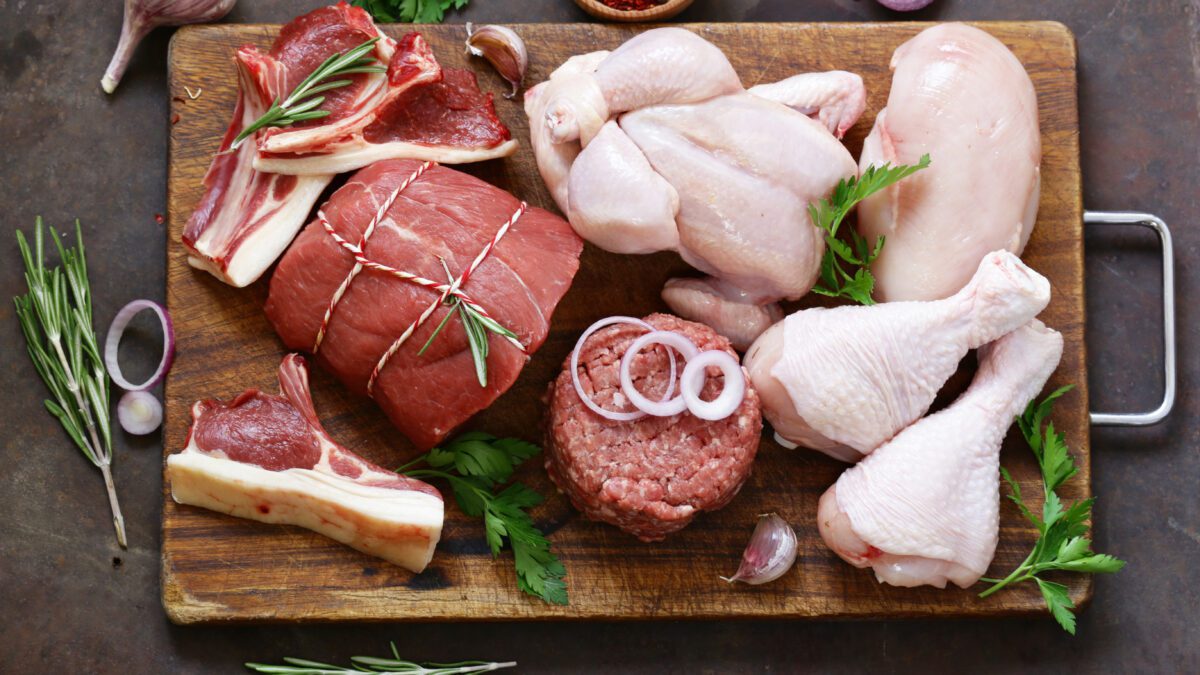 For some people, meat is a highly controversial food. Many consider meat to be a staple in their diets as it is an excellent source of protein and essential nutrients. Others however believe that eating meat is unethical, unnecessary and harmful for your health.

Meat is animal flesh which humans prepare and consume as food; many countries use the term meat only in reference to the muscle tissue of mammals and birds. It can be consumed in a variety of ways such as steak, ribs and roast or in a grounded form such as hamburgers.

Previously internal organs such as the liver, kidneys and brains of animals were also consumed in all cultures, however recently the western diet tends to exclude this offal now. Currently, most of the meat we consume comes from animals which have been domesticated and raised on farms, or in industrial complexes which are home to thousands of animals at any one time. Some traditional cultures are still reliant on hunting as the sole method of obtaining fresh meat to eat.

Meat can be categorised by its animal source and how it is prepared. Red meat comes from mammals and is richer in iron and protein than white meat. Some examples of red meat involve beef, pork, lamb and goat. White meat on the other hand is actually lighter in colour and comes from birds such as chicken, turkey, duck and goose.

There is also a third category of meat which is processed meat. Processed meat is modified with additives or through processes such as salting, curling, drying or smoking as means to preserve or enhance flavour. Bacon, sausages, luncheon meats such as bologna or pastrami are all examples of processed meats.

Lean meat is an excellent source of protein, as it is estimated to contain at least one third of protein by weight after it has been cooked. One hundred grams of a cooked chicken breast (white meat) is thought to contain thirty one grams of protein where as the same serving amount of lean beef will contain only twenty seven grams (1, 2).

Top ways to maximise the benefits from eating meat

This is always healthier than any processed meat which may contain harmful additives. It environmentally and ethically a better option if you choose organic meat from small farms.

Select beef which is grass-fed

Studies have found cattle which have consumed a natural diet consisting of grass instead of grains end up producing meat which has higher amounts of healthy omega-3 fatty acids and antioxidants (3, 4).

This is because when meat is cooked at a high temperature, fat is released and drips onto the hot cooking surface. In return, this can produce toxic compounds which can rise up and seep into the meat. If you choose to grill or barbeque your meat then ensure you wipe away any dripping immediately and avoid the meat becoming overcooked or charred as this can reduce the formation of the toxic compounds (5, 6).

Some people claim that by eating meat there at an increased risk of developing cancer however this is largely dependent on the kind of meat you eat and how you cook it. Some studies have found a link between a high intake of red meat and several types of cancers (7, 8, 9, 10). However in almost all of these studies, there was an indication that cooking meat on a high heat has a significant effect.

Several observational studies have found that consuming processed meats – not red meat, appears to create an increased risk for heart disease (11, 12). Other large studies have shown an association between the consumption of processed and red meat and the development of type two diabetes (13, 14). However there is not enough information and it is possible that other dietary and lifestyle factors contributed to the development of diabetes.

Eating meat has numerous health benefits such as a reduced appetite and increased metabolic rate (15, 16). There are consistent findings which show that eating animal protein helps to retain muscle mass (17) and improve bone strength and density (18).

Ultimately, whether you choose to eat meat or not is a personal choice and should be respected regardless. There is evidence to show the benefits of both red and white meat, however as always everything is better in moderation.

For more information on red and white meats and which offers more nutritional benefits, see our Advanced Nutrition and Weight Management Course