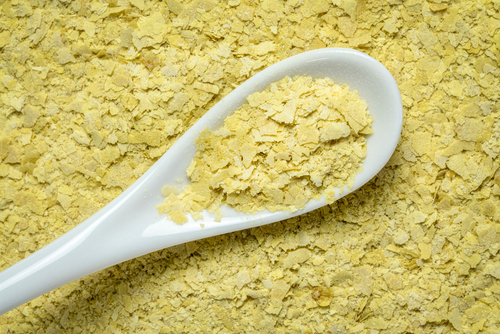 Nutritional Yeast: High in Vitamin B and suitable for Vegans

What is nutritional yeast?

Yeast is a fungus that has existed for hundreds of millions of years. Living or active yeast is responsible for the process of fermentation which is used in baking and brewing alcohol. Nutritional yeast is different in that the yeast cells are deactivated and then dried. Because the yeast cells are deactivated, there is no point in using nutritional yeast to make your bread rise. It should be used for adding flavour and boosting the nutrient content of your meals.

What is nutritional yeast derived from?

Nutritional yeast is a food ingredient derived from Saccharomyces Cerevisiae, a single-celled organism that is cultivated on molasses, picked, cleaned, and dried with heat to kill or “deactivate” it. It has no leavening ability since it is inactive and does not froth or develops like baking yeast.

Other varieties of yeast in comparison

The three primary forms of yeast that S. cerevisiae produces are:

Low in protein and fat

Nutritional protein is high in protein, low in fat, and rich in vitamins and minerals.

Nutritional yeast contains a good variety of essential amino acids, however, because it is normally eaten in very small amounts, it is not normally an appreciable source of protein for vegans and vegetarians.

High in Vitamin B

Nutritional yeast is a good source of most B vitamins, which are important for energy release in the body. The main exception is vitamin B12, which is naturally only found in foods of animal origin. Some nutritional yeast is fortified (artificially added) with vitamin B12. This is a particularly good option for vegans who may struggle to get enough vitamin B 12 in their diet.

Nutritional yeast is not to be confused with Brewer’s Yeast, which is a completely distinct type of yeast. Nutritional yeast is shelf-stable if kept in an airtight container in a cold, dry location. It may be used as a topping for popcorn or pasta, similar to how Parmesan cheese is used, or as a basis for cheesy sauces and dips.

Used instead of parmesan in vegan dishes

Nutritional yeast comes in the form of powder and flakes. It is commonly used instead of parmesan in vegan dishes, says Anne-marie O’Shea, Technical Specialist in Nutrition at Future Fit Training. It doesn’t require any cooking or preparation; simply sprinkle it over pasta dishes, mashed potatoes or roasted vegetables. It can also be used in baking, for example, to make cheese-flavoured bread or scones.

Uses and side effects

Nutritional yeast can be used in moderation, up to several tablespoons (10–30 grammes) each day.

To surpass the acceptable upper intake limits (UL) for the vitamins and minerals it contains, nutritional yeast would have to be consumed in huge quantities.

Those who are allergic to yeast should avoid it, according to research.

Those who have a hard time metabolising folic acid, such as those with the MTHFR gene mutation, should read labels carefully and choose unfortified nutritional yeast.